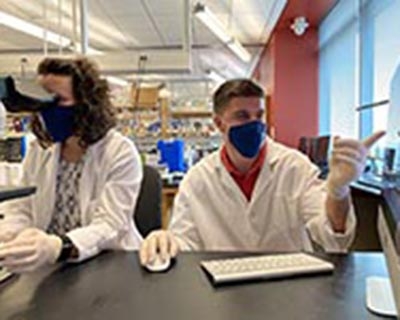 For nearly 15 years, Dr. Brooks – a professor of physiology, medicine and biomedical engineering and member of the university’s BIO5 Institute and Sarver Heart Center – has studied how sex differences can lead to an increase in hypertension and diabetes, resulting in increased cardiovascular and kidney disease risk in women.

It’s known that prior to menopause, women generally have lower blood pressure than men. They also have greater protection against cardiovascular disease – the leading cause of death worldwide – as well as kidney disease and diabetic complications. The opposite is true after menopause. However, the biological mechanisms linking menopause and the associated hormonal changes to increased risk of cardiovascular disease in women are poorly understood.

A new study – conducted by the Brooks Lab in collaboration with BIO5 Institute member Janko Nikolich-Žugich, MD, PhD, head of the UArizona Department of Immunobiology, and Merry Lindsey, PhD, chair of Cellular and Integrative Physiology at the University of Nebraska Medical College – find a potential explanation for premenopausal protection against hypertension in women. The findings are published in the American Journal of Physiology – Heart and Circulatory Physiology.

“Based on previous work, we know estrogen played an important role in preventing kidney inflammation and cardiovascular disease in women,” Dr. Brooks said. “Our study shows how estrogen can directly impact the immune system to increase protective, anti-inflammatory T regulatory cells, which can guard a female from hypertension and kidney damage prior to menopause.”

Dennis Pollow, PhD, a former postdoctoral fellow in the Brooks Lab now with Roche Tissue Diagnostics, found that menopausal females had less of these cells than premenopausal females. Dr. Pollow and co-authors from the UArizona Physiological Sciences Graduate Interdisciplinary Program Joshua Uhlorn and Megan Sylvester discovered that this difference correlated with an increase in pro-inflammatory markers in the kidneys of menopausal females. When T regulatory cells were depleted with a neutralizing antibody in premenopausal females, blood pressures rapidly increased.

“Our ultimate goal is to understand how high blood pressure develops in women across different ages, and how therapies and exercise could be used to control our increased risk of hypertension, the silent killer, which then leads to increased risk of stroke and heart attacks in women after menopause,” Dr. Brooks said. “Based off this study, we hope to identify new pathways of treatment to help postmenopausal women better manage their blood pressure, as current medications are not as effective in women as they are in men.”

Dr. Brooks added that their study could also have implications for sex differences in COVID-19 susceptibility and disease severity.

Men have more pronounced immune responses to the disease than women, she said. This hyperactive immune response, termed the cytokine storm, is an inflammatory reaction that causes immune cells to release a large amount of pro-inflammatory cytokines, or small proteins, that can lead to widespread tissue damage and failure of organs, including those fed by the circulatory system.

“Further research into the role that anti-inflammatory immune cells have in protecting against hypertension could also be relevant in protecting women against this COVID-19 cytokine storm,” Dr. Brooks said.

A version of this story appeared originally on the UANews website.

About the University of Arizona Health Sciences
The University of Arizona Health Sciences is the statewide leader in biomedical research and health professions training. UArizona Health Sciences includes the Colleges of Medicine (Tucson and Phoenix), Nursing, Pharmacy, and the Mel and Enid Zuckerman College of Public Health, with main campus locations in Tucson and the Phoenix Biomedical Campus in downtown Phoenix. From these vantage points, Health Sciences reaches across the state of Arizona, the greater Southwest and around the world to provide next-generation education, research and outreach. A major economic engine, Health Sciences employs nearly 5,000 people, has approximately 4,000 students and 900 faculty members, and garners $200 million in research grants and contracts annually. For more information: uahs.arizona.edu (Follow us: Facebook | Twitter | YouTube | LinkedIn | Instagram).

About the University of Arizona
The University of Arizona, a land-grant university with two independently accredited medical schools, is one of the nation's top public universities, according to U.S. News & World Report. Established in 1885, the university is widely recognized as a student-centric university and has been designated as a Hispanic Serving Institution by the U.S. Department of Education. The university ranked in the top 20 in 2018 in research expenditures among all public universities, according to the National Science Foundation, and is a leading Research 1 institution with $687 million in annual research expenditures. The university advances the frontiers of interdisciplinary scholarship and entrepreneurial partnerships as a member of the Association of American Universities, the 65 leading public and private research universities in the U.S. It benefits the state with an estimated economic impact of $4.1 billion annually. For more information: arizona.edu (Follow us: Facebook | Twitter | YouTube | LinkedIn | Instagram).